The HomePatrol-2 Digital scanner from Uniden will be noted for its features that do not compromise its simplicity and ergonomic stability. Users will be delighted about its easy-to-set location feature. It will only ask for the zip code to be able to return a set of local channels to which the client may tune in.

Added to this feature is the capability of the device to scan various channels and be compatible with lots of signal types. This is helpful in intercepting messages from various sources and platforms which may include older and newer devices. 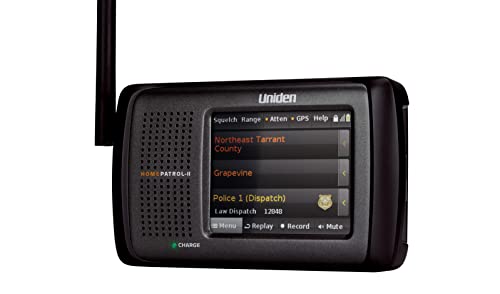 One of the channels to which the Uniden HomePatrol may tune in are those that are in conventional form; these may be sourced from emergency offices such as those that concern fire, medical, or natural disasters and weather.

Another non-conventional channel type from which the device is capable of receiving includes those that are trunked such as the Motorola Type I, lii Hybrid, II Smartnet, Smartzone Omnilink, II VOC including LTR Standard, EDACS Standard, Project 25 Standard, EDACS Narrowband, and many more similar types.

For source variation, the device can also tune in to communications sourced from the devices such as APCO 25 Phase 2, Phase 1, Motorola EDACS, X2-TDMA and other LTR systems. The gadget provides access to these devices in order to ease the compatibility of the digital radio scanner with the others in all situations possible.

Albeit having lots of features that include compatibility with many devices and its replay features, Uniden HomePatrol-2 remains simple and ergonomic. You can bring it anywhere you go with its small body built and simplicity. Looking like its predecessor HomePatrol-1, the HomePatrol-2 is easier to operate and this makes it stand out among other brands.

The brand also boasts of its capability to provide you with local channels with its built-in program. Users will only have to enter their ZIP Code to locate the local programs that are available within the area.

Users gave an 8 out of 10 for Uniden HomePatrol-2 for being able to store as many as 500 programs within the device. They have also noted that the product is so light that it can be brought almost anywhere. One also praised the alphanumeric tagging of stations, even suggesting a website to which the users may effectively tag their programs.

Users also noted that the brand can be easily programmed and set up especially for people who want to have immediate access to its exclusive features. Programming can be done even at the comfort of its interface and even without the assistance of the PC.

However, more advanced users who opted to install programs in their devices through the PC also found a similar utility from the digital scanner. This may be useful for programming features such as the transitioning from one channel to the other, the compatibility with other frequencies and devices, etc.

Although the HomePatrol-2 is loaded with so many features, users have noted that the product was hard to program manually. This can be a minor problem, as the gadget can be pre-programmed upon purchase through the website or with the help of the manual provided.

The device may also be loaded enough with features such as instant replays, automatic tuning in, among others, that the need to reprogram will immediately vanish. For people who may opt to personalize their device, the gadget can be connected to the PC and the programs available can be obtained through the brand website.

The Uniden HomePatrol-2 is not short of excellent features, such as the automatic scanning of available channels, indexing of existing channels, and pairing with non-Uniden devices. These features make the unit compatible with almost any device and with almost any type of signal for easier communication.

Despite having too many features to carry, the product also boasts of its exceptional simplicity that makes it easier to use for many clients and future patrons. Those who are new to using digital scanners will have an easy time setting the device up and using it immediately.

Other exceptional features that make the product worth purchasing is its easier access to local programs through ZIP code encoding, and its replay features that will set the standard for many digital scanners in the market.